Ground Control is a science fiction real-time tactics video game developed by Massive Entertainment and published by Sierra Entertainment. The game was first released onto the Microsoft Windows in 2000. Its story focuses on a conflict between two factions vying for control of a planet and the alien artifacts on its surface.

Following the aftermath of the Third World War (known in the game as "The Sixteen Minute War") in the 25th century, mankind successfully rebuilds and begins colonization of several planets across the galaxy, while the Earth becomes ruled by the Global Central Command (GCC) - a council of elected representatives, including those from mega corporations that rose to power following the fall of Terran nations. Despite treaties set out by the GCC, conflict between the various powers spearheading colonization occurs daily, often over resources and trade routes. By the time the game begins, two powers assisting in colonization efforts, the Crayven Corporation and a religious sect known as the Order of the New Dawn, begin vying for total control over a distant world known as Krig-7b.

Major Sarah Parker, an officer for the Crayven Corporation, is assigned by Enrica Hayes, a director in the company working aboard one of their starships, the CSS Astrid, to lead ground operations on Krig-7b. During her assignments, Parker fails to rescue a defector from the Order called Bishop Delondre, but receives a data disk from him concerning an Order operation known only as "Project Garm". Later into her operations while protecting an important Crayven facility, her team successfully secure an alien relic called a "Xenofact", which prompts Hayes to order the destruction of Order bases that have secured other Xenofacts. Eventually, after the Order's warship, the WCS Clergy, is driven from the planet's orbit, Crayven forces successfully destroy the Order's last remaining base in the planet's northern polar region, and gain control over a Xenofact far larger than had been seen in their campaign. Satisfied with Parker's efforts, Hayes orders Crayven forces to begin mopping up any Order stragglers left on the planet.

Seeking to prevent the corporation from achieving total victory on Krig-7b, two officers of the Order, Deacon Jarred Stone and Paladin Magnus, Stone's CO and an old friend, rally surviving troops in order to conduct a series of daring, guerrilla-styled hit and run missions, against high value targets of the Crayven, despite concerns that they fight a losing battle without the assistance of the Clergy. During their strikes, Stone and Magnus recover important data, which details more about Project Garm, providing insight on Delondre's motive for defecting. Magnus soon disappears shortly after Aegeri, a "Great Cardinal" of the Order, arrives on board the WCS Retribution, with much needed reinforcements. While Aegeri questions some of the targets that Magnus chose, he soon directs Stone into continuing his strikes against Crayven forces. During an assault on a Crayven airbase, Magnus contacts Stone for a secret meeting, passing on Delondre's ID code, among other codes, so that he can fully access all of the Project Garm data. After the mission, Stone discovers that both the Order and the Crayven seek control over the planet's Xenofacts.

Shortly after a well organized Crayven assault is countered, resulting in the Order securing a Xenofact, Aegeri and Hayes meet and declare a ceasefire, forging an alliance between the two powers and creating a joint task-force aimed at unlocking the secrets of the Xenofacts. Angered and feeling betrayed, Stone reunites with Magnus to stop the alliance gaining full control over the Xenofacts, but their hidden base is soon besieged by a large Crayven force, leading Magnus to sacrificing himself in order for Stone and their troops to be safely extracted by Parker, who had discovered that Aegeri and Hayes had met up weeks before the ceasefire was announced. Working together alongside Magnus' friend Cole, a Crayven operative, they quickly discover that the Xenofacts found on the planet were among many created by an alien civilisation more than a million years ago, as part of an ancient, galaxy-wide fail-safe system designed to counter an invasion, in which each Xenofact contains a powerful war machine within it that can only be activated from Krig-7b. The group quickly realise that both the Crayven and the Order sought control over the system so as to use it to gain complete control over the galaxy, and that Aegeri and Hayes now plan to carry this out together.

Seeking to stop this, Stone, Parker and Cole launch a desperate assault on the huge Xenofact, killing Aegeri while successfully destroying the artifact with DXT charges, which destroys the Retribution and sends both Hayes and the Astrid elsewhere in the system. While Parker, Cole and Stone celebrate their victory and saving millions of lives while trying to figure out how to leave Krig-7b, Hayes contacts her boss in the Crayven Corporation and reports her failure at utilizing the Xenofacts, to which her employer remarks that there are still other ways to win control of the galaxy, as the Astrid drifts through space. 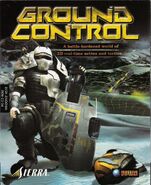 European cover art
Add a photo to this gallery

Add a photo to this gallery

Missile vehicle
Add a photo to this gallery 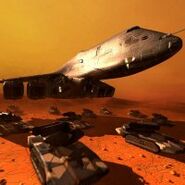 Reinforcements
Add a photo to this gallery

Retrieved from "https://groundcontrol.fandom.com/wiki/Ground_Control?oldid=6010"
Community content is available under CC-BY-SA unless otherwise noted.