Ground Control II: Operation Exodus is a 2004 real-time tactics video game developed by Massive Entertainment. It is the sequel to the award-winning Ground Control. Ground Control II improved upon its predecessors graphics and game mechanics.

The story of Ground Control II takes place in that same universe as that of the original game but starts 320 years later and has little in common with the original game. The human race has discovered faster than light travel and has colonized the galaxy. There are two groups of colonies in this universe, dubbed the Inner Sphere and the Outer Sphere. A fictional physical phenomenon causes the communications between the two area to be only possible through a network of special relay stations built at the border of the spheres. Intergalactic travel is also impossible due to a fictional unexplained barrier between the galaxies.

After the battle of Krig-7B that took place in the original video game, Major Sarah Parker (the original game's protagonist) destroyed the Earth's early warning relay station, commandeered a battlecruiser called CSS Astrid (seen in the original game) and escaped. In the next centuries, a stellar war that lasted 70 years changed the political layout of the colonies. A colony called Draconis Empire subjugated the Inner Sphere and established the Empire of Terra. It destroyed the communication relays, severing communications with the Outer Sphere. The next two hundred years was the age of strife for the Outer Sphere, for they had to rediscover the precious knowledge to which they no longer had access. Eventually, the Outer Sphere colonies formed two interstellar states: The Northern Star Alliance (NSA) and the Intergalactic Trade Guild (ITG). After the two hundred years however, the Empire of Terra invaded the Outer Sphere and began taking over the NSA. In 40 years of battle that followed, the Empire took most of the NSA territory and finally invaded the Morningstar Prime, the capital of NSA.

The game begins with Captain Jacob Angelus becoming a field commander for the NSA. Despite Captain Angelus's "exceptional" battlefield performance, it is clear that NSA cannot win this war and it is only a matter of time before the Empire overwhelm them. However, an unknown spacecraft crashes on Morningstar Prime which Captain Angelus secures. NSA scientists who study the craft reveal that Major Parker outfitted CSS Astrid with an ancient device called a Singularity Drive that enables the ship to bypass the intergalactic barrier and travel to other galaxies. NSA plans to use the ship to evacuate NSA citizens to another galaxy, where the Empire cannot follow. Angelus is sent to find CSS Astrid but his search is complicated by Imperial forces in pursuit. Eventually, CSS Astrid is recovered and brought back to Morningstar Prime.

On Morningstar Prime, Captain Angelus must deal with the treachery of an NSA general as well as the arrival of fresh Imperial reinforcements. A tragic final battle takes place in which Captain Angelus and his allies help evacuating anyone they can to CSS Astrid and see to their safe departure. Despite all the efforts, the Imperials destroy an entire detachment of NSA forces as well as an NSA shuttle, presumably loaded with passengers. Captain Angelus himself does not make it to CSS Astrid and is stranded on Morningstar Prime.

The Northern Star Alliance (NSA) is a conglomeration of democratic colonies of the now defunct Crayven Corporation. The capital of the NSA is Morningstar Prime. Before the war, the colonies enjoyed peace and prosperity, which can be attributed to its hard working citizenry. The war however, upset everything for them. The NSA use conventional ballistic weaponry and traditional wheeled or tracked land vehicles known as terradynes, just as Crayven Corporation did in the previous game. NSA units are generally more durable but slower than their Viron or Terran counterparts. Their heaviest vehicle, Ravager Terradyne, has more firepower and armor than any other vehicle, but moves the slowest. The NSA forces cannot cross waterways without air transport.

Formerly the Draconis Empire, the Empire of Terra (commonly known as Terran Empire) wishes to conquer the entire galaxy and rule upon all humanity by sheer force. Imperator Vlaana Azleea leads the imperial offensive against the NSA. The Terrans boast sheer numerical superiority. The Empire of Terra features two types of combat vehicles. The first are combat hovercrafts called hoverdynes, which are more maneuverable than the NSA terradynes. The second are striders, large bipedal mechs armed with autocannon or missiles. The Empire of Terra also features three defensive turrets: anti-infantry guns, anti-armor cannons and the all-around powerful Pulverizer grand cannons. Imperial units are equipped with energy weapons, which often equal or supersede their opponent's projectile weaponry in terms of damage. The Empire uses a military ranking model similar to that of the Ancient Rome; their foot soldiers, field commanders and generals are respectively called legionnaires, centurions and imperators. The Empire's use of hoverdynes, energy- or flame-based weapons and the red as their main color is reminiscent of the Order of New Dawn in the original video game. Although the Terran Empire appears throughout the campaign, it is not a playable multiplayer faction.

The Virons are a reclusive race of bipedal creatures who lived on a planet in the Ragnorak Nebula. Virons breathe the fictional zethane gas instead of oxygen. They were first discovered by Sarah Parker in the fictional 25th century, in the interregnum period between the two games. The clan-based Virons resisted all efforts at diplomacy. The Empire of Terra however, invaded Ragnorak Nebula and rendered Virons' planet uninhabitable, forcing Virons to live aboard seven clan ships. The Empire succeeds in coercing one of the Viron clans to fight for the Empire in exchange for amnesty and zethane. Other Viron clans however, did not comply in spite of the threat. Halfway through the game, one of the Viron clans is convinced to take NSA for an ally. Virons vastly employ biotechnology. Their armed combat hovercrafts, called centruroids bear an organic design. The Virons possess the unique ability of melding, which allows two basic units to combine into a single, more advanced unit. The process is reversible; the new unit can be unmelded into the original constituent units. This ability gives the Virons greater flexibility in combat, although units are defenseless during the meld/unmeld process. Damaged Viron units slowly regain lost health. In Viron language, name precedes military rank; they always call the game's protagonist "Angelus Captain".

European cover art
Add a photo to this gallery

Morningstar city
Add a photo to this gallery 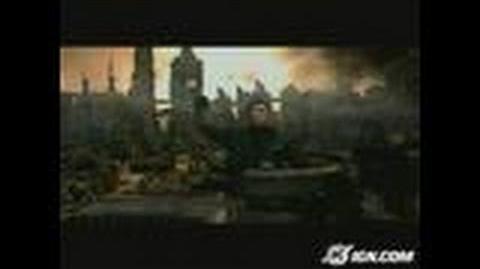 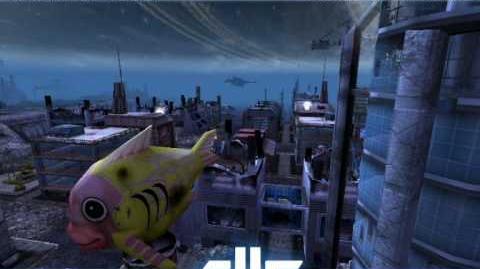 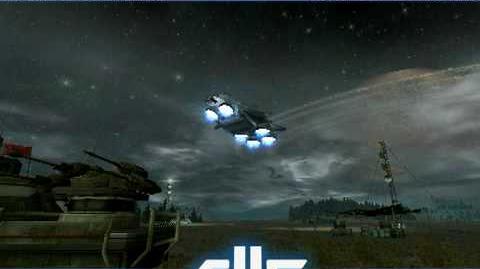 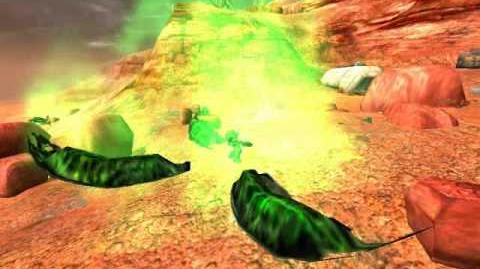 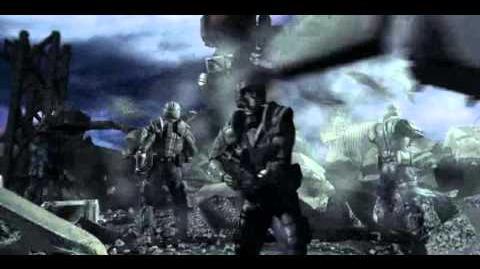 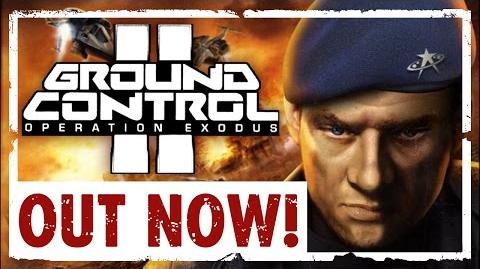 Retrieved from "https://groundcontrol.fandom.com/wiki/Ground_Control_II:_Operation_Exodus?oldid=6011"
Community content is available under CC-BY-SA unless otherwise noted.